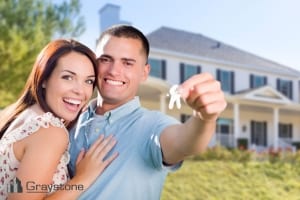 There are three common ways to title property between spouses. “The ‘joint tenant’ approach is the least common and usually must include the language ‘with right of survivorship and not as tenants in common.’ Spouses typically acquire title as “tenants by the entireties,” which only applies to spouses.

Sometimes you will see a couple who acquired the property before marriage. In some states, a pre-marital joint tenancy automatically becomes tenants by the entireties upon marriage. The drawback to joint tenancy is that it is possible for one person’s interest to be alienated by deed or by suffering a judgment, lien, bankruptcy or similar.

Some states allow joint tenancy to be partitioned, meaning that ownership can be separated. The purpose of getting title cleared in one spouse’s name after the other’s death is just that.

While records are fresh, a check of the dates of valid marriage synching with a clear title can produce an easily marketable property with no surprises. The best advice for a widow or widower is to have the title reviewed by an attorney. Of course, when the couple engages in any estate planning, a competent lawyer will review such documents.

I’ve explained each of the 3 common types below.

Let’s start with the “joint tenants” part. Joint tenants are two or more people who own property together. Four requirements or “unities” must be present to allow them to hold title this way.

The Right to Convey the Property

Joint tenants can sell or transfer their shares to third parties without the approval or consent of the others. If Tenant A transfers or sells his interest to “Joe,” the joint tenancy that was in place between Tenants B and C would remain in place—these two individuals would still be joint tenants with rights of survivorship.

But because of the unity of time and unity of title requirements, Joe would not become a joint tenant with them. He did not take title at the same time or with the same instrument. Joe would, therefore, become a tenant-in-common with Tenants B and C.

The survivorship provision of a JTWROS allows the owners to automatically and immediately inherit another owner’s share if one of them should die. The property would pass outside probate and by operation of law.

This means that a tenant cannot transfer his share to beneficiaries in his will, and his heirs cannot inherit it if he dies without a last will and testament. His share automatically belongs to his co-tenants at his death.

If Tenant A dies, Tenants B and C would now each hold a 50-percent interest in the property rather than a one-third interest. Because the transfer does not require probate, Tenant A’s creditors would have no entitlement to his share, and it would not be included in his estate to pay his final bills.

Tenants in common of an item property may own equal or unequal shares, sometimes expressed in percentages.

Each tenant in common may sell his share to another.

In joint tenancy, the share of a joint tenant who dies goes to the surviving joint tenants until there is but a single survivor, at which time the sole survivor owns the whole.

Not so with tenants in common where when such a property owner dies, his share goes to his estate.

The size of each (co-tenant’s) share is fixed once and for all and is not affected by the death of one of his companions. When a tenant in common dies, his interest passes under his will for his undivided share is his to dispose of as he wishes.

Another feature of tenancy in common: all owners are allowed to use the whole of the property in common with all tenants in common.

Tenants by entirety (TBE) is a method in some states by which married couples can hold the title to a property. In order for one spouse to modify his or her interest in the property in any way, the consent of both spouses is required by tenants by entirety. It also provides that when one spouse passes away the surviving spouse gains full ownership of the property.

For example, a husband could not decide to sell his ownership interest in a vacation home owned with his wife without the wife’s consent.

About half of the U.S. states allow tenancy by entirety for all types of property; a handful of states allow it only for real estate.

Property that is held by tenants by entirety is comparable to community property. Both spouses mutually own the entire property as a whole rather than any type of subdivision where each would have individual ownership. The rights of tenants by entirety can supersede the terms laid out in a will or trust that might otherwise grant property to heirs upon the death of one of the spouses.

For example, the will left by a deceased party might state they want one of their surviving children to take possession of a piece of property. If that property is jointly owned by the decedent’s spouse and falls under the terms of tenants by entirety, the terms of the will may be ignored. The surviving spouse would retain sole ownership of the property.

The nature of tenants by entirety means that creditors who may have claims against one spouse’s assets cannot pursue the jointly held property for compensation. If both spouses hold joint debt with creditors, they could pursue the jointly held property. Federal tax liens against one spouse could in some circumstances be attached to property that is covered by tenants by entirety and potentially subject to seizure.

A tenancy by entirety can be eliminated under such circumstances as a divorce, which would see the property divided between the parties, or a voluntary, mutually sought petition by both parties to change the nature of ownership.

Page load link
We use cookies to ensure that we give you the best experience on our website. By accessing or using the Website you agree to be bound to our Terms of Service.Continue
Go to Top